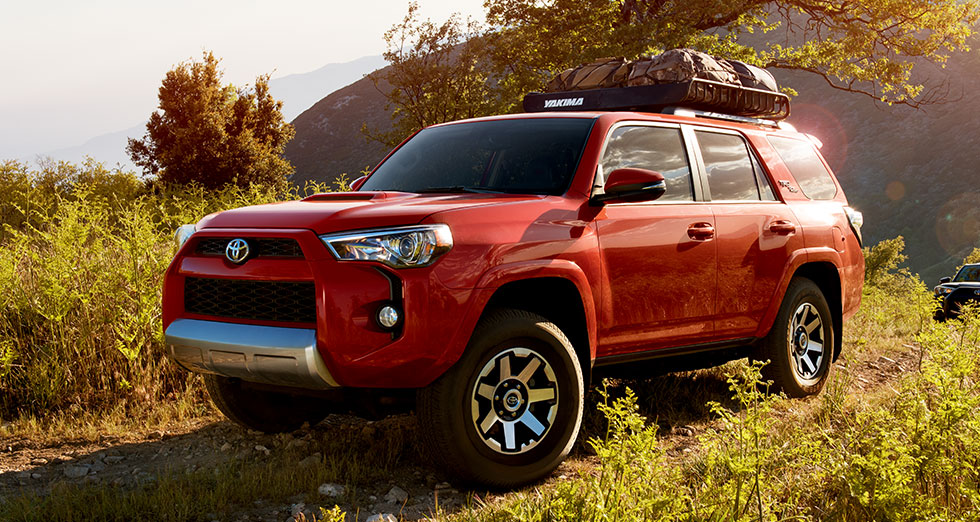 5 Reasons To Get Your 2018 Toyota 4Runner In Fort Lauderdale

You Can Check Out The 2018 Toyota 4Runner TRD Pro

Toyota’s widely praised line of TRD Pro off-road vehicles includes the 2018 Toyota 4Runner TRD Pro. The 2018 4Runner TRD Pro has several heavy-duty features that allow it to overcome the rigors of off-roading. The oversize TRD Bilstein(r) shocks with rear remote reservoirs allow the 4Runner TRD Pro to clamber over nearly obstacles while still maintaining a comfortable ride. The shocks and the TRD-tuned springs work together to further increase the Toyota 4Runner TRD Pro’s already impressive off-road capability. Any aficionado of off-roading can tell you that the right wheels and tires are important (but often overlooked) for maximum off-roading capability. The 2018 Toyota 4Runner TRD Off Road Pro features lightweight 17-inch wheels wrapped in massive off-road tires. Many of its competitors, even those that claim they can go off-road, are useless because they don’t have the right wheels or tires.

Many of the 2018 Toyota 4Runner’s competitors have to make do with turbocharged 4-cylinder engines. While some of these engines are fine, they do have have serious deficiencies. Turbocharged 4-cylinder engines are not as responsive as naturally aspirated V6 engines like the one found in the 2018 4Runner. The power delivery is also not as linear and consistent. Finally, they just don’t sound quite as good. The Toyota 4Runner features a standard 4.0L V6 making 270 horsepower and 278 lb.-ft. of torque. This impressive engine has been widely praised for its responsiveness, power delivery and sound. It can even tow up to 5000 lbs.}

The 2018 Toyota 4Runner Comes With A Suit Of Armor

Any real off-roading vehicle should have skid plates to protect the underside of the vehicle from boulders, logs and other dangerous obstacles. Any vehicle that doesn’t is simply a pretender. The 2018 Toyota 4Runner does have standard ¼ inch thick aluminum skid plates. These plates protect the engine, front suspension, fuel tank and transfer case (if your Toyota 4Runner is a 4-wheel drive model). Plus, its body on frame construction delivers the durability that has made the 4Runner an off-road legend.

The New 4Runner Comes With A Real Spare Tire

The standard Trailer-Sway Control and the optional Trailer Brake Controller are possibly the 2 most important electronic towing features that the Toyota Tundra has. Trailer-Sway Control detects any swaying and applies brake pressure at individual wheels to stabilize the trailer. Trailer Brake Controller automatically adjusts the amount of trailer braking (with a compatible trailer).

Check out the different trims of the Toyota Tundra. Come into Lipton Toyota for a test drive and find your next work truck today.

The 2018 Toyota 4Runner has many of the safety features you’d expect. It features an advanced airbag setup, ABS, Traction Control and more. It also has standard active front headrests. In the event of an accident, these headrights automatically move in a way that reduces whiplash injuries.

If you’re in Pompano Beach, Hollywood, Pembroke Pines or elsewhere in the Fort Lauderdale area, give us a call now or schedule your appointment online to test drive the new 2018 4Runner at our Ft Lauderdale car dealership today.

You can also choose from Lipton Toyota’s extensive selection of 2018 Toyota 4Runner SUVs and other Toyota models including the Toyota Corolla, Toyota Camry, Toyota RAV4, Toyota Prius and more! We also have certified pre-owned Toyota cars, pickup trucks and SUVs in the current model year for you to choose from. From Toyota service to a great selection of new Toyota models, choose Lipton Toyota, your preferred Toyota dealer for all of your automotive needs.